How to Protect Your Pet and Family from Ticks 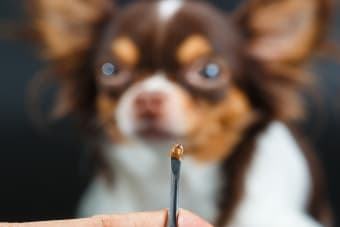 Ticks may be small, but they can be dangerous to both people and pets as spreaders of a number of potentially serious diseases. Our South Salem vets talk about these external parasites and the diseases they can cause, including which signs to beware of, and how to keep ticks away from your pets and your family.

Ticks are external parasites that cannot fly or jump and so rely on hosts (usually wild animals that introduce ticks to your area) for transportation. Once they've found an animal or human, they attach themselves and feed on their host's blood. Once they are on your property, pets frequently become hosts and the parasites can then be brought into your home.

Serious conditions that affect humans, such as Lyme disease, can be caused by an infected tick's saliva getting into the host's bloodstream. Because of their ability to spread dangerous diseases to both animals and people, ticks should be considered potentially dangerous to your pet's health.

The black-legged tick (also known as the deer tick) is one of the most common tick species found in South Salem and has the dubious distinction as being the species responsible for most cases of Lyme disease in our state. It's joined by the lone star tick and American dog tick in being a leading cause for concerns when walking your dog through the woods.

The black-legged tick is found in wooded, bushy areas and both males and females have flat, oval bodies. Female deer ticks, meanwhile, are about 1/8" in size and orangish-brown (with a reddish-brown colored middle that darkens when filled with blood), male deer ticks are roughly 1/16" and reddish-brown overall. They are longer than they are wide, and have sharply pointed, toothed mouthparts you can see clearly from above. Though tick exposure may occur year-round, they are most active during warmer months (April to September).

How do I check my pet for ticks?

Even after a short walk through bush and grass, make sure to check deep within your dog or other pet's fur, behind and inside the ears, between the legs, around the neck, and between the toes.

How can I treat or prevent ticks?

You can use a number of different methods for getting rid of and preventing ticks on small pets and dogs. You have several options, including spot treatments, oral medications, tick collars, or even using a medicated shampoo formulated to kill ticks on contact in order to bathe your pet. Talk to your vet to decide the right option for you and your pet.

To help keep ticks away from your household, it's a good idea to keep nearby grass or lawns well-trimmed. This will give ticks fewer areas to live and breed, reducing the risk of ticks being around. At the height of tick season, you'll also want to limit the amount of time your pet spends outside.

Do you think your pet have ticks? Our vets are experienced in diagnosing and treating many common illnesses and conditions. Book an appointment at South Salem Animal Hospital today.

South Salem Animal Hospital is accepting new patients! Our experienced vets are passionate about the health of South Salem companion animals. Get in touch today to book your pet's first appointment.